Faculty, family rallied around recent grad as she fought cancer

Taylor Gibson is a walking, jumping, kicking bundle of tenacity. The physical activity and coaching specialization graduate, ’17 BSEd, loves coaching and teaching recreational sports to kids. People who know her say she’s all in, all the time.

And they’re right. In the gray days of late 2016 when she was sparring with thyroid cancer, Gibson defied expectations. But dark moments lurked — few, but terrifyingly real: When her body exuded radiation from her treatment. When her calcium levels were out of whack and she hit rock-bottom lows. Then, thoughts about the fragility of life crept in. Then, the tough girl got scared.

That’s when she leaned into her personal heroes and found courage.

Gibson, 23, is alive today because her mom stalked her on Facebook during her first summer away from their Cleveland home. Taylor worked at an outdoor adventure camp — teaching kids high-element rope courses, kayaking, repelling — a job she loved. But something in her photos didn’t look right.

“My mom said, ‘The left side of your neck looks so swollen,’” Gibson recalled. “I said, ‘I’m fine. You’re just scrutinizing my photos.’”

Kim Gibson didn’t like the raspiness of her daughter’s voice, so when Taylor came home, she saw the doctor to appease her. Within days, she went from thinking she had a bad case of strep throat to receiving a stupefying diagnosis: papillary thyroid carcinoma.

“They tell you all the things that could go wrong,” she said. “Your jugular vein is right there. Your carotid artery is right there. I was over 18 so they made my mom leave the room. They asked, ‘What do you want to do?’ I’m like, ‘Omigosh, I don’t know. I need my mom.’”

Her diagnosis came as her senior year began; she didn’t want to graduate late. Her doctors at Ohio State’s Arthur G. James Cancer Hospital weren’t wild about the idea, but Gibson stayed in school. Her classmates and professors rallied around her.

“She’s the type of person who tackles things head on,” said Sue Sutherland, associate professor of kinesiology and her advisor. Sutherland is known for teaching students to create caring, emotionally safe environments for young athletes. “Getting to know and understand my students is really important. I said, ‘Whatever I can do to support you, we’ll work through this.’”

Gibson had her thyroid removed in September and was back on campus two weeks later. After a follow-up appointment, she went straight to her class on teaching racquet sports … with a 3-inch incision on her neck.

“I couldn’t move my neck,” she said, “and I looked terrible. My professor (Sam Hodge) asked, ‘Are you sure you should do this?’”

Next, she tackled a three-hour class teaching children with disabilities. Her charge was the high-maintenance child. She told him, “See, I had a boo-boo. We need to work this out together.” They did.

Her doctors waited until winter break to start radiation treatments so she wouldn’t miss class. For three months, Gibson deprived herself of iodine so her body would drink up the radioactive pills. “By the second week, I was starving,” she said.

Once or twice, she was late to class. “Dr. Sutherland said, ‘I trust you. You don’t need to bring a million doctors’ notes or tell me exactly why you missed.’”

Adjusting to life without her thyroid was taxing. She was easily fatigued. “It was freaking everybody out, but I had a good attitude about it,” she said. “I didn’t show emotion for the longest time. ‘It’s fine,’ would be my response.”

But one day, she had a tough exam, and it hit her. She was tired of the rigmarole. Tired of eating avocados. Tired of feeling tired. “I had a moment of panic. I thought, I should have taken this semester off. What am I doing?”

She pressed on, focusing on heroes like her grandfather. Just after her surgery, the two had become unwitting allies in their individual struggles against cancer. As lung cancer took its toll on his body, he was ever more her champion.

“Throughout my battle he would remind me that I was the strongest person he knew,” she said. “Even with his deteriorating health he never stopped fighting, just like I knew that I wasn’t going to either.” 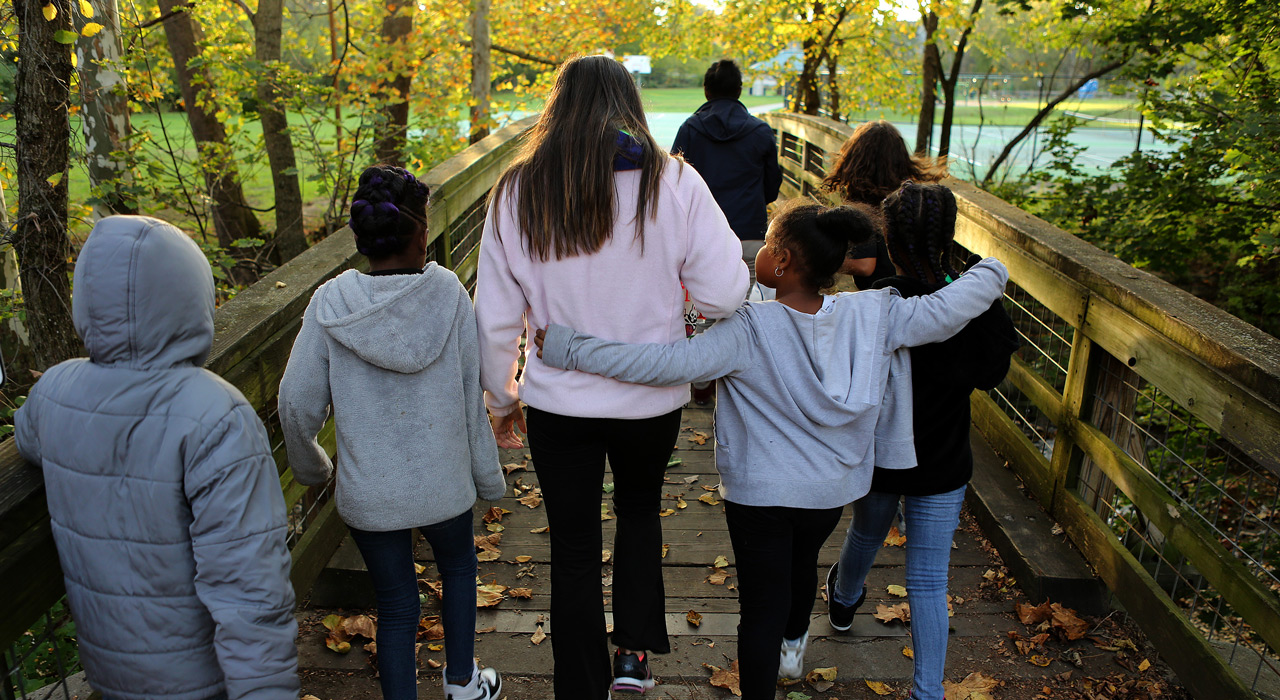 That December, Gibson got radiation treatments, made the trip back to Cleveland, then shut herself in a bedroom to protect her family from the radiation oozing from her. They left food at her door — pizza, but it tasted like a mouthful of aluminum. Her mom and cousin sat outside the room making small-talk.

Back at school, Gibson’s blood draws showed her calcium levels were all over the map. Sitting in Sutherland’s class, she felt her hands clench. She walked to the James, got IV fluids, then went to her next class.

“Her personality brought her through that semester,” Sutherland said.

Slowly, through spring, she began to feel more like herself.

Then Sutherland and Professor of Kinesiology Jackie Goodway, her stalwarts, announced an opportunity to study abroad in Japan.

“When I found they were leading the trip, I had to go. Somehow I’d make the finances work.”

She received a Tsukuba Summer Institute Study Abroad Scholarship; her doctors cleared her to go. In July, she found herself in Tokyo, boarding trains full of passengers sitting in silent introspection. Nestled among them, something resonated in Gibson. It was peace. Perfect peace.

“I felt so relaxed and in tune with myself,” she said. Taylor, the tough girl, had made it through.