Talk about anxiety. Urban Meyer, ’88 MA, and his players know the meaning of the word.

Anxiety is what can happen, and sometimes does, when several million people are trained on your every move via ESPN. It’s what happens when you fumble the ball, and fans go from thinking you’re a superhero to assailing you on Twitter. It’s about being a hair’s breadth from making the playoffs, but not quite making the cut. (And everyone and his brother has a theory why.)

Football players, after all, are college students. And these days, their 18- to 22-year-old peers are a pretty angsty bunch. Their pressure cooker includes the term paper due the same week as midterm exams, fighting with a roommate and overdue car insurance.

But today’s college students also are stressed about politics, national security, school shootings and debt. Like their predecessors, they’re figuring out who they are, but in an era of omnipresent social media and technology, which thrills but dogs them.

Up to 40 percent of college students nationwide, in fact, report anxiety as a top concern. That’s different than 10 years ago, when depression ranked the No. 1 mental health issue on campus. The university in two years added 13 new counselors and staff to handle a backlog of stressed students. Some experts say this generation is on the brink of a mental health crisis.

And Meyer’s players have the added pressure to win games amid near-perpetual media scrutiny. Engaging in typical college-age “stress relief” could get them booted off the team.

So why do they seem so cool under duress? Everyone knows winning football games is about mental preparedness, right? The answer, Meyer says, is that he and his staff work tirelessly to channel potentially destructive anxiety into a positive outcome.

“We spend an inordinate amount of time teaching our players how to respond to situations. Situations academically, situations socially and obviously situations athletically,” he said.

“They’re at a football program where you’re expected to win every game by a large margin. And so that anxiety is not uncommon. As a matter of fact, it’s uncommon if you don’t feel it.” 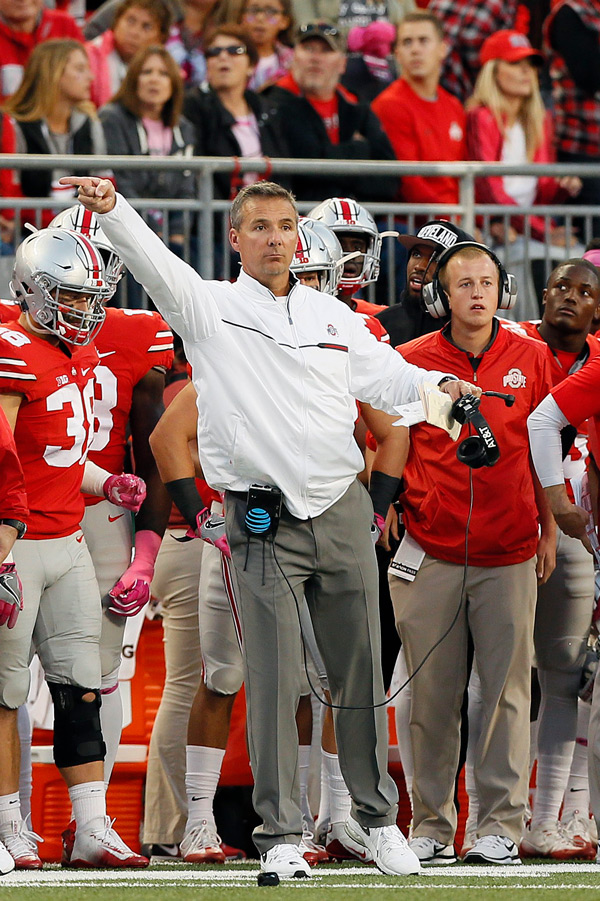 “But I consider stress a blessing,” he said. “There are a lot of very successful people who care very deeply about what they do and still deal with anxiety and other issues.”

Meyer knows. He is one of those very successful people.

It’s no secret Meyer had to learn the hard way how to manage stress. He is by nature a tightly wound guy, and he’s harnessed that drive to win three national titles. But the will to win has a negative side, too.

His wake-up call came in late 2009, after his Florida Gators lost the SEC Championship in what was supposed to be a golden year. The team had won the championship the season before; all the best players had returned.

But late in the season a cascade of bad luck hit the program. A player was suspended for bad conduct on the field. Two top coaches announced they were leaving. An intense lightning storm slammed the practice field before the last home game, spooking several players so much they refused to go back on the field. A player was busted for DUI. The championship loss followed.

Mickey Marotti, ’88 MA, then director of strength and conditioning at Florida, remembers those lightning crashes like they were an omen. “It was weird. It all happened at the wrong time. It was a tipping point,” he said.

His good friend was a mess. “He was always worried. He wasn’t taking care of himself. He lost a bunch of weight. It was hard because I didn’t know how to help him. We were real close, and he’s pretty close to my wife, and we couldn’t help him.”

Marotti has coached with Meyer for 20 years at three universities. (Ironically, they both earned master’s in sports management at the college in 1988, but hardly knew each other then.) Now Ohio State’s assistant athletic director for football sports performance, Marotti is part of the “inner four” upon whom Meyer regularly depends.

“I used to be like him,” Marotti said. “But I developed a great knack for listening. That’s why I got these couches.” He pointed to what some call the Bob Newhart couch and armchairs in his office at the Woody Hayes Athletic Center. Meyer parks himself on the leather sofa for bull sessions almost daily. “I sit here (at my desk). I just listen. I learned to be a great listener,” Marotti said.

Having someone listen, it turns out, is critical for overcoming anxiety. After quitting his Florida job in January 2011, Meyer ensconced himself with supportive people.

An Athletes in Action staffer became a spiritual advisor. He read books about coaching and leadership. He talked to coaches across the country. He spent quality time with his wife, Shelley, and their three children. He immersed himself in Bible passages — a pre-dawn routine he continues.
“If I don’t get that, that’s a tough day for me,” he said.

In those long talks, scripture readings and quiet moments, Meyer found clarity. In the 11 months before coming to Ohio State, he changed his approach to life and, therefore, his approach to coaching. After going through the dark places, he recognizes patterns of anxiety in others, especially his players.

“That’s why I say you’re not a lone wolf,” Meyer said. “Everyone is going through it. Everyone. But you have to have mechanisms — that’s a term I use quite often with our guys, with my staff, with my family. What are your mechanisms to get yourself in order, to get the ship going on track?”

Meyer has spent six years reinforcing those mechanisms at Ohio State. Assistant coaches work with small groups of players — more effective than preaching to all 120 at once — on not just football drills but life skills. Motivational speakers engage players about mental health, fear of failure and reaching out for help.

“We have access to a full-time sport psychologist here on our campus. Years ago, that was unheard of,” Meyer said.

The need for family connections is modeled and reinforced. During the season, coaches’ spouses and children watch Thursday practices and then share a meal with players. “He wants players to see the coaches around their families, how they act, how they treat their wives, how they treat their kids,” Marotti said. Families bring candy to players, invite them to their homes and to church. 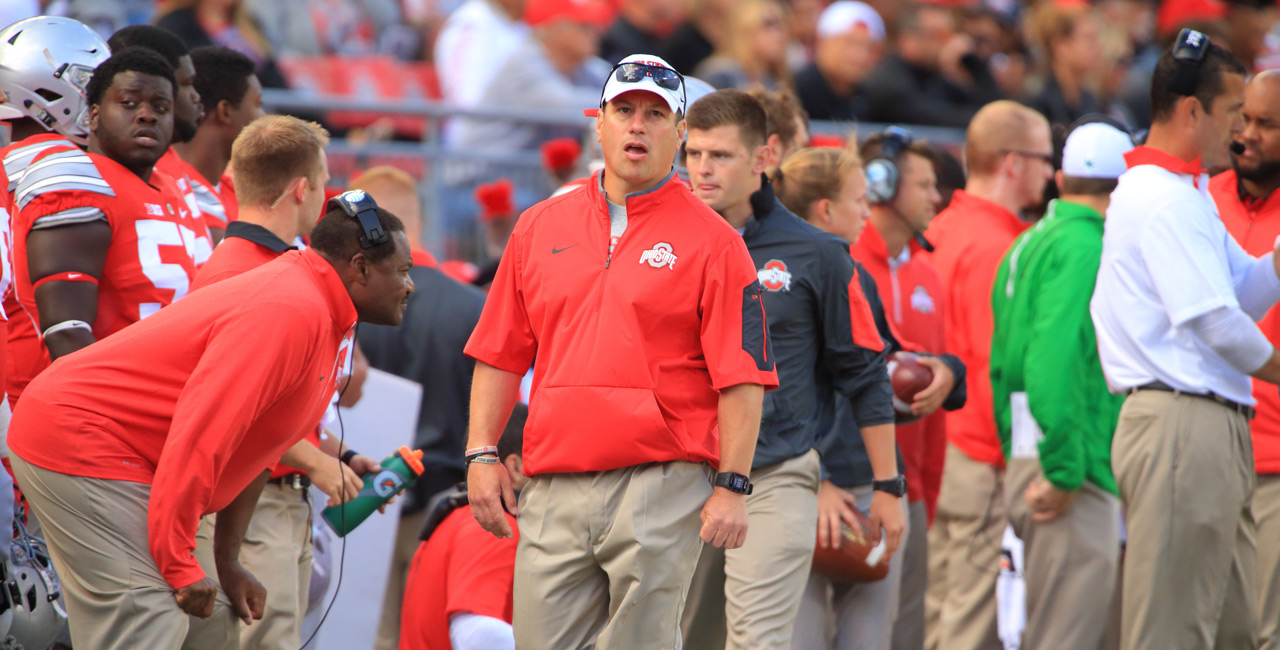 Training emphasizes the Brotherhood of Trust, “how to trust each other, surround yourself with people you trust and how to earn people’s trust,” Meyer said. It’s not the lightning bolts that life throws at you, but how you respond to them, he tells players. He put the sentiment into an equation: E + R = O. Event (dropping a pass, breaking up with your girlfriend) + Response (better field positioning, talking to a friend) = Outcome (win the game, overcome tough times).

At its core, Meyer’s approach to harnessing anxiety and achieving wholeness revolves around relationships. Twitter followers might find unbelievable videos of 250-pound linebackers tearing up when they tell their coaches and teammates they love them. Or players embracing muscle-bound teammates and urging them to “talk, let it out.”

The approach is unlike any program he’s seen, Marotti said. “Other places, it’s just business. You come in, do your deal and go home. Here, we’re really cultivating the person.”

“All they do is talk, back and forth, dialogue nonstop,” Marotti said. Who’s the best in the NBA. How the elections played out. Black Lives Matter. “To a point, I’m like, ‘It’s time to go. Get out,’” Marotti said.

The upshot? “Those guys don’t have anxiety,” he said. Instead, they have a brotherhood, a support network and a plan for when the going gets tough. It’s all in the Urban Meyer playbook: Coach by caring for your team and teaching them to care for each another. It’s about those Meyer mechanisms.

“When things aren’t going well, you use your faith, your family, your friends, your coach, your psychologist, your team. Because we’re not made to handle these situations on our own. We’re made to ask for help, count on the people closest to us and fight through it,” Meyer said.