EHE’s research on at-risk youth stresses that similarities, not differences, connect us all

You’ve seen the scruffy-faced young person wearing an oversized sweatshirt and ball cap, holding a cardboard sign asking for help. You might encounter him during a night out downtown.

Do you speak to him? When faced with a situation so different from your own circumstances, it’s normal to focus on the difference.

“Most people don’t know what to say or if they should say anything,” said Natasha Slesnick, professor of human development and family science. “I think people prefer not to pay attention. It makes it more comfortable for them.”

Slesnick’s mission is to call out the similarities between those who live on the streets and those of us who just walk by.

During most of her 20-year career, Slesnick, a licensed clinical psychologist, has focused her research on homeless youth and interventions that get them into stable housing. Her work has expanded worldwide as her current and former graduate students apply what they’ve learned.

Slesnick once was asked if homeless youth even exist. And if they do exist, do they really want services?

Nationwide, 1.7 to 2 million young people are considered homeless or runaway, according to the National Coalition for the Homeless.
Exact numbers are hard to pin down because homeless youth are skilled at blending into their surroundings. In Columbus, they camouflage themselves with book bags, hoodies and headphones to resemble college students.

Often physically, sexually or emotionally abused by their guardians, homeless youth don’t want to reconnect with them. They often dodge systems such as homeless shelters because they don’t want to go home. To cope with the trauma and abuse they’ve suffered, more than half self-medicate with drugs and alcohol.

For James Malone, living on the streets for a year and a half was a constant struggle. “I didn’t know what I was going to eat or where I was going to sleep,” he said.

“I tried to do whatever I could to get some money and a roof over my head.” 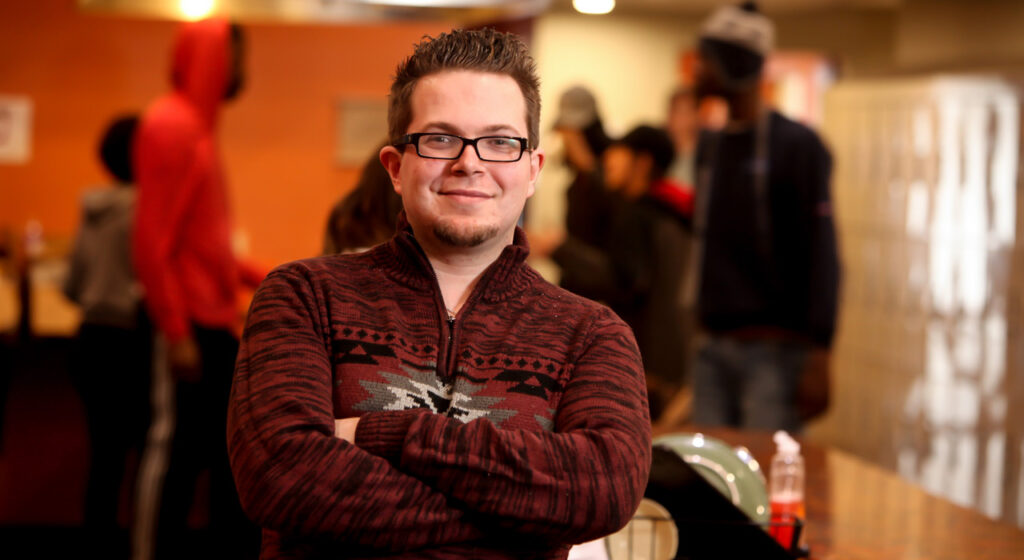 Slesnick’s first $2.2 million research project proved what she thought was obvious: Many homeless youth are hungry for mental health and substance-abuse services and advocates. The study, funded by the National Institute on Drug Abuse, found that an approach that calls on social, recreational, familial and vocational connections significantly reduced substance use and depression while increasing stability.

“These young people are so lonely and feel so unloved and uncared for that the experience of having someone care about them can change the fundamental schema of the world being heartless,” Slesnick said.

While she grew up in India, Slesnick’s father, Irwin L. Slesnick (’62 PhD), made service to others a priority.

“He gave me a real sense of the world and taught me about perspective, empathy and being able to come out of yourself to learn more about the lives of others.”

To help homeless youth known for hiding in plain sight, Slesnick first had to find them. She enticed them by offering something they needed.

In 2006, Slesnick created the nation’s only research-based drop-in center for homeless youth in Columbus. Her research identified street-living youth and provided essential services that helped lead them to affordable, long-term housing. She created a one-stop shop to meet immediate needs: getting a meal, finding clean clothing and taking a shower. At the same time, she gained her research population.

With help from the center, Malone found immediate resources to get off the streets.

“They treated me like any other person, not a piece of trash living in an alley,” the 30-year-old said. “They made me feel like family and gave me the tools to better myself.”

Today, Malone manages a local Wendy’s, where he provides direction to members of his team. He pays forward Slesnick’s support by raising awareness about youth homelessness as a public speaker.

“Star House and the organizations they partner with helped lead me in the right direction where I could create the building blocks to get out of the situation I was in.”

Proving that they work

“They’re fearful of being preyed upon by older people at homeless shelters,” said Slesnick.

Her data proves that drop-in centers are powerful hubs that move youth away from street life and toward employment, housing and stability. Of 79 youth in the study, 80 percent came to the drop-in center after being encouraged to do so. Only 18 percent encouraged to go to homeless shelters went there. In fact, nearly a third of the youth assigned to the shelter group ended up seeking out the drop-in center instead.

Funding is key. Slesnick wants her research to better guide how federal money is spent. In 2014, the Runaway and Homeless Youth Act allocated $53 million to shelters — compared to only $17 million for street outreach and drop-in programs.

Slesnick’s research is shifting perceptions of homeless youth. Displaced young people are not so different from kids we all know, she stresses.

“We can all be one step away from being alone, without a place to live and feeling as if no one loves us,” she said. “Those who experience homelessness are more like us than they are different.” 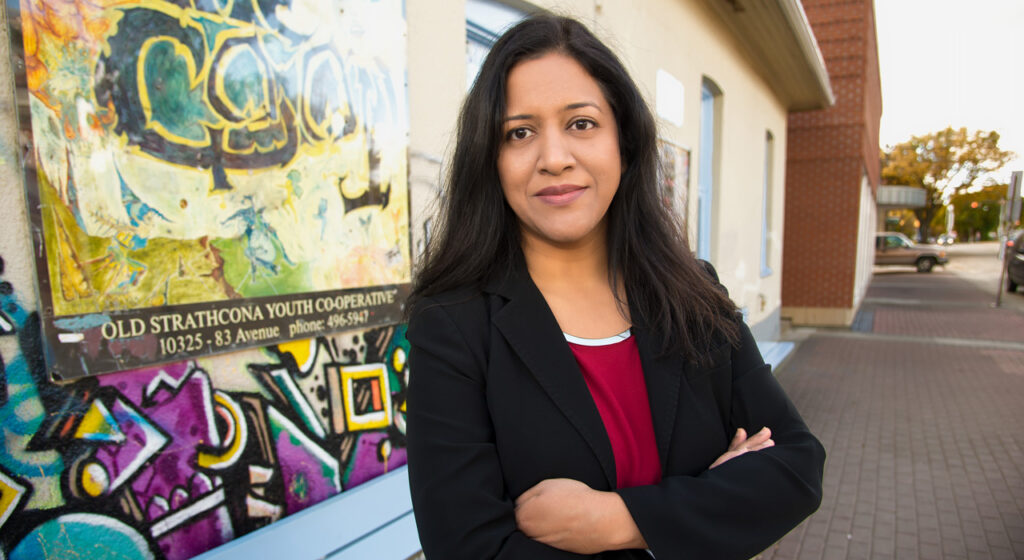 Helping youth around the globe

After graduating, Pushpanjali Dashora (’10 PhD) took her talents and her most-insulated winter coat to Alberta. Ohio’s cold weather makes homelessness difficult; Canada’s below-freezing conditions can make streetlife unbearable. At least 235,000 people experience homelessness each year in Canada. Dashora, assistant professor of human ecology at the University of Alberta, is raising awareness about homelessness in one of Canada’s richest neighborhoods.

In Fort McMurray, homelessness is sparked by the nature of jobs in the area. People come to the city, near the Athabasca oil sands, to work in the oil industry. The physically taxing jobs force employees to work 10 days on, then four days off.

“When they are working, they can live in the oil company’s camps,” Dashora said. “During the days when they are off, they have nowhere to go.”

Employees who can’t afford hotels often spend days off on the streets.

To raise awareness about homelessness, Dashora created videos that have motivated those running drop-in centers to expand their hours. Her work is contributing to the Alberta Interagency Council on Homelessness, which created a plan to end homelessness in Alberta within 10 years.

Slesnick’s graduate students usually don’t come to her interested in homelessness, but soon develop a passion for learning more about at-risk populations.

“Before my research with Natasha, I didn’t know much about homelessness,” said Xiamei Guo (’10 MS, ’13 PhD), assistant professor of psychology at Xiamen University. Growing up in China, Guo was warned not to interact with those living on the streets.

“Since doing research with her, I’ve learned that they are trying to change the way they live. They are actively searching for help. Trying to find a job and get education. They are fighting.”

She found that for young people from intact families, resiliency is connected to parental attachment and family environment. For those with divorced parents, peer attachment was the only factor that impacted resiliency. Her findings show that the teens from divorced families had higher resiliency.

“I’d like to see universities creating activities for students to improve their positive intimate relationships, specifically for those who have experienced partner violence.”

Working with Slesnick built the foundation for her work, Guo said. “The strength-based perspective that she uses in her homeless intervention has inspired me to study the positive psychological traits among these at-risk adolescents,” Guo said. 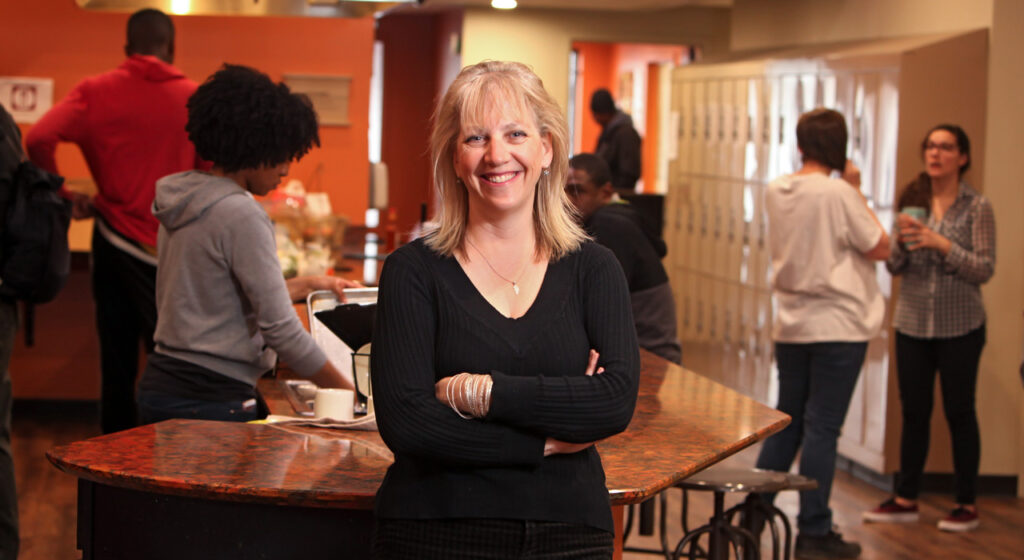 “The drop-in center is a place for immediate need,” Slesnick stressed. “I want homelessness to end, and to do that, we need housing for homeless youth.”

Recently, Slesnick completed a housing intervention with homeless mothers recovering from substance abuse. Although they were young, living on the streets and doing anything they could to feed their children and themselves, Slesnick found that the women nevertheless could maintain free housing.

“Reviewers (of the grant proposal) were concerned that if we gave a home to a homeless youth, they would trash it or drink excessively. But they’ve been living on the streets, and that is much harder.”

Her intervention found that young homeless mothers simply need upfront resources to get an apartment and connect to services. Having housing allows them to find jobs and stay clean.

“If we can do more of this, we can possibly end homelessness,” she said.
Another barrier is the inability of underage youth to access identification. Only one-third to half of youth visiting Star House have health insurance, she said.

Laws prevent homeless minors from getting their own IDs without consent from a guardian. To get medication, homeless youth must go to the emergency room and pay hefty fees,

“This is why so many walk around on the streets with major illnesses,” Slesnick said. “They can’t even consent to their own medical care.”
Despite these obstacles, the youth she serves keep Slesnick hopeful.

“They are smart, engaging, have a sense of humor and dreams and all sorts of wonderful human characteristics that people might not expect.”

Give to Homeless Youth Research Fund #315804