The numbers are hard to swallow: Nearly half of American children are living precariously close to the poverty line. They inhabit inner cities and rural settings, but also suburbs. Their families can barely afford basics, let alone provide opportunities to pull children out of their circumstances.

And because economic inequality is the greatest predictor of which children will succeed in school, prospects for poor children by many measures are not good. Money, it appears, buys the stuff that ensures academic success: Preschool. Extracurricular activities that promote “soft skills.” Books in the home. Time. After all, parents working second shift often can’t help with homework.

Experts call these deficits opportunity gaps — resources and support that would allow children to do better but remain just out of reach.

It’s against this backdrop that EHE strives to bring equity to education. The college’s research on early literacy development and teacher interventions is nationally recognized. Community outreach programs work in tandem with urban and suburban schools to study and improve instruction. Moreover, across the country our alumni are implementing new strategies for urban and STEM education and evidence-based teaching.

In Columbus’ struggling Hilltop area, Principal Elizabeth McNally (’10 PhD) and her team at Highland Elementary shoulder a sizeable task: To turn around a school among the lowest performing in the state. Every Highland student is economically disadvantaged. Twenty-eight percent are English-language learners. One quarter require special education. Many deal with abuse, parental drug addiction and homelessness.

And yet, McNally and her team are in no way discouraged.

Up for the challenge

Wearing a Fitbit and heels that would debilitate some women, McNally scales up to 20 flights of stairs and walks nearly five miles each day navigating Highland’s halls. One spring day she called over her shoulder to two running girls, “Walking feet, my little angels.” Small feet immediately slowed their pace.

“I feel like this is very much a pilot program for what could be,” she said. “We know that so many of our students just need more — more one-on-one time, more interventions, more of that small group support that is so helpful and informative.” 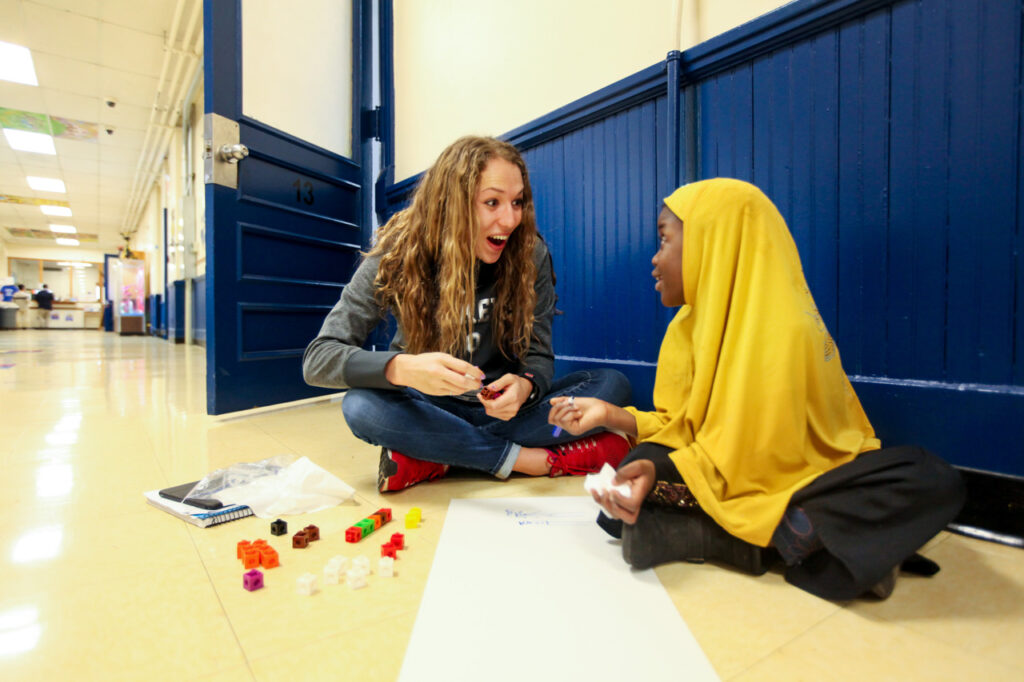 The Highland team employs a host of strategies for its “pilot”: Doing deep-breathing exercises after recess. Nixing the old suspension policy. Partnering with community agencies to get students coats and therapy and homework help.

And, McNally has intentionally partnered with the college to improve learning for these high-needs children.

Making rounds at the school, the principal stepped into several classrooms. Allison Volz (’10 PhD) — who studied alongside McNally at Ohio State — is a rare PhD teaching fourth-grade literacy at Columbus City Schools. She doesn’t believe in traditional seating arrangements, so her students were clustered on the floor writing essays.

“She does national presentations on adolescent literacy and she’s teaching my fourth grade,” McNally said.

In the library, 25 undergraduates from the college conducted a case study to boost mathematics instruction by building rapport with second-graders. They are part of the Community Teaching and Learning Consortium, a college program funded by donors Dick and Louesa Foster that capitalizes on family, school and community partnerships.

Kevin, 7, revealed to two teacher education students that he has a new brother. Pre-service teacher Tamika Massey saw a segue. “When baby Marcus is 7, how old will you be?”

We’re listening for the student’s strategy – trying to unpack how the kid is thinking.
– Theodore Chao

She listened as Kevin tried to formulate an answer, recording the interaction with an iPad. That listening piece is critical, said Theodore Chao, assistant professor of mathematics education who teaches the cohort.

“It’s so easy for us as teachers to jump in and correct a kid — it’s almost a subconscious reaction,” he said. “But then you’re taking over and doing the thinking for them. You want to allow the kid space to think. So, we’re listening for the student’s strategy — trying to unpack how the kid is thinking.”

That method borrows from what researchers have known for years about reading. Teachers don’t focus strictly on the alphabet or memorizing words, but involve students in stories and the meaning behind them. A goal of the Highland project is to train teachers to engage youngsters — even kindergartners — so much that the kids present their own mathematics strategies to each other. 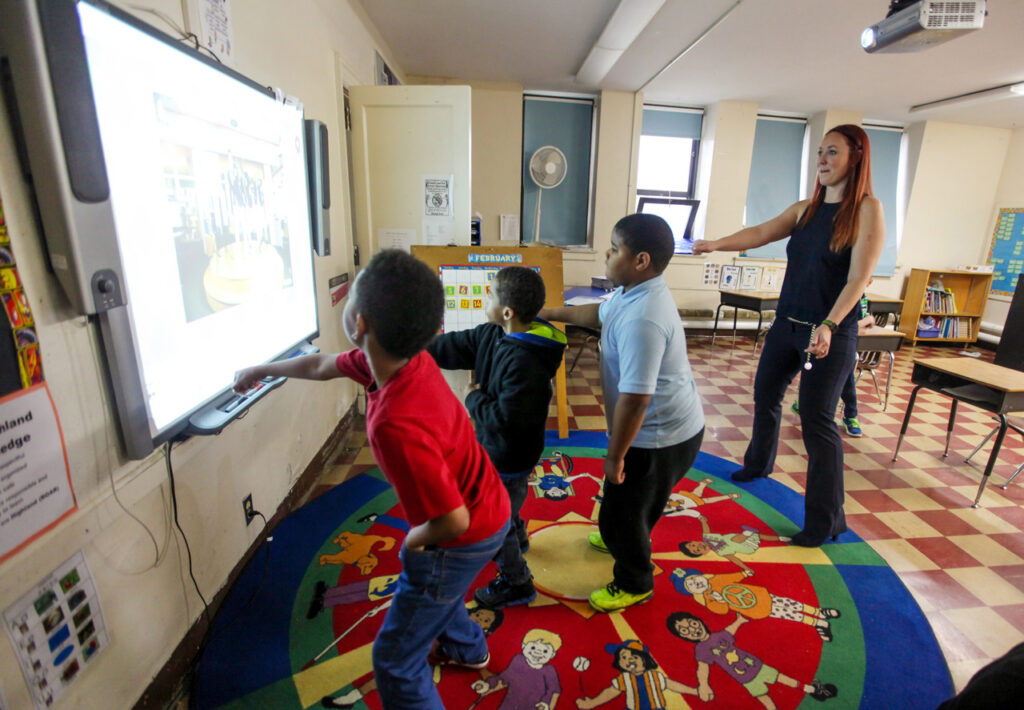 “Students who do this always do far better on state-level assessments,” Chao said. “But not only that, they have much more confidence in their mathematical thinking. They feel there’s nothing they can’t do mathematically.”

“Writing and reading are reciprocal processes,” Wilson said. “But we know nonfiction has its own challenges — it has a heavy vocabulary and conceptual load. So we decided to go with nonfiction because, one on one, we can really support the kids.”

On Tuesdays, Chao’s undergrads met in the school’s bookroom to strategize mathematics instruction before working with students. Also as part of the project, parents participated in evening sessions to overcome biases and build learning solutions for children.

Getting pre-service teachers into diverse school settings is imperative to closing gaps in school achievement, experts say. Nearly a quarter of teachers nationwide leave the profession or transfer after serving for just one year in high-needs schools, according to the National Center for Education Statistics. That turnover hurts students.

With the consortium, McNally said, students get one-on-one interaction and small groups that are so necessary. “At the same time, pre-service educators have an opportunity to ask questions, to see students who are experiencing different types of trauma and crisis and how we work through it. Then it doesn’t seem so overwhelming” when they take positions in urban schools. 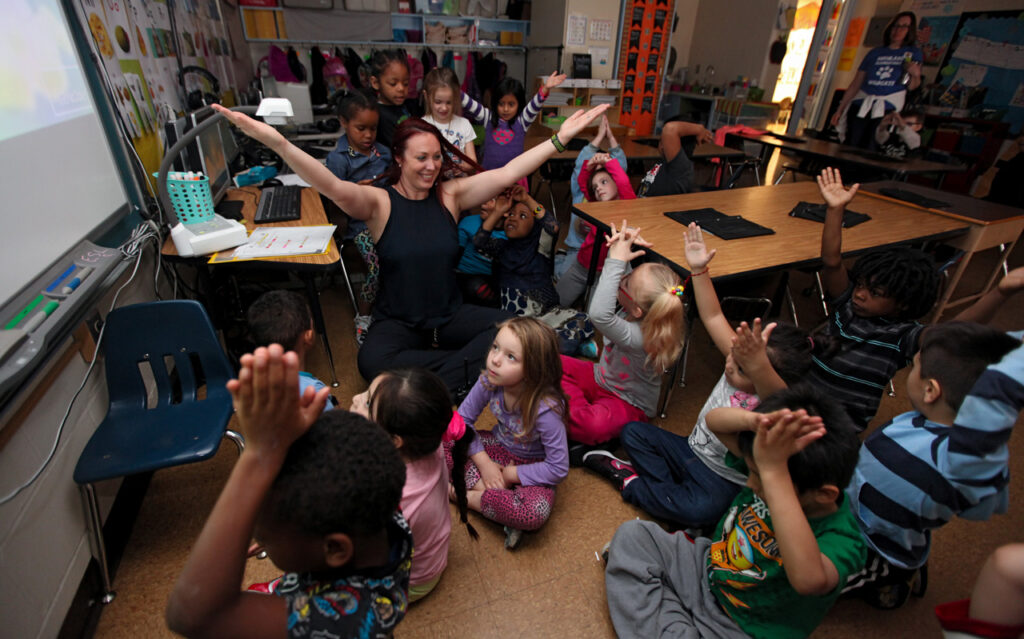 Downstairs, Michelle Masters’ kindergarten class hummed. “The way she has everyone learning and engaged and happy all at the same time,” McNally whispered, “is a testament to her amazing, soothing, always educating, always fun style of instruction.”

Mobility rates are high — between 40 and 60 percent of Highland students have been or are homeless. Only four of its kindergartners also attended the school’s preschool program. Those students are the school’s highest performing kindergartners, McNally said.

Unfortunately, gaps in achievement begin before children ever walk into their first class. Most Highland kindergartners began school a year behind their peers nationally. Because children learn more and faster during their first five years than at any other time, providing very young children with quality early education is pivotal.

“Kids are capable of learning anything you throw at them,” said Shayne Piasta, an associate professor who researches early literacy development at the college’s Crane Center for Early Childhood Research and Policy. “There have been studies showing that very young kids can begin learning concepts of physics. It’s all in how you teach it.”

Piasta and other college researchers have uncovered many interventions that can bring kids up to speed on literacy and other skills. For example, practicing phonological awareness — recognizing letter sounds through word play, songs and rhymes — is proven to develop reading skills.

But too many early childhood centers lag behind. A study by Kristin Farley, a graduate research associate and Piasta’s advisee, shows that on a given day in 350 Ohio classrooms, 63 percent of preschool children received zero phonological instruction.

“There’s huge variation across classrooms but also within classrooms,” Piasta said. “The real challenge right now is making sure that those teaching methods are getting put into practice. It can’t be a top-down approach.”

Last year, the college partnered with the city of Columbus to provide Early Childhood Education Professional Preparation Pipeline Scholarships — free bachelor’s degrees over five years for up to 100 teachers who already have associate’s degrees in the field. Learning those essential, evidence-based practices has already raised the bar for early childhood instruction in at-risk neighborhoods like the Hilltop. 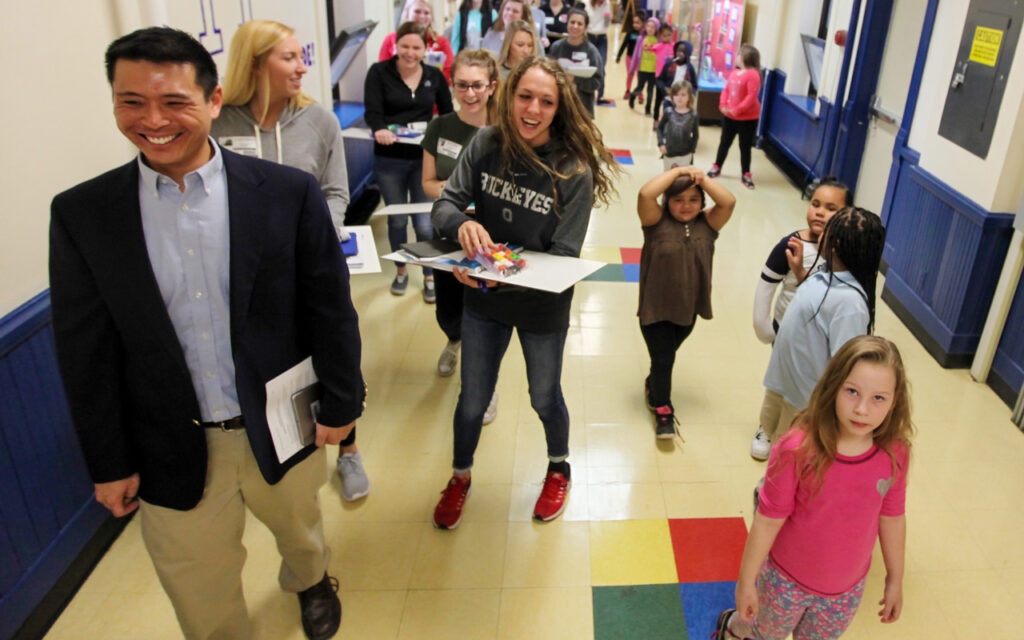 McNally sat in the lotus position surrounded by a pod of kindergarten girls enthralled with her hair. Room lights were dimmed; a soothing voice directed children to breathe deeply. McNally and 26 kids simultaneously pulled their hands into a crest over their heads. After-recess yoga and five-minute dance breaks have become routine at Highland. Teachers say the strategy works to focus young minds.

This year, the Highland staff embarked on a study of the neurosequential education model — teaching in ways that counteract brain-altering trauma such as homelessness and abuse.

“We know that when children are in a fight or flight zone, they’re not able to do frontal cortex stuff that we need them to do,” she said. “Instead, they’re reverting back” to disruptive behavior.

Each class now has a relaxation station with a pedal exerciser. Oximeters measure heart rates so students can monitor if they’re in the “learning zone.” Kids are given stress balls to knead if they’re antsy.

The school practically has eliminated out-of-school suspensions. For homeless children, the punishment was tantamount to throwing children onto the streets. Students who fight are forced to spend the day ironing out their differences with a behavior coach. As a result, attendance rates at Highland are the highest in years. Parents — who spend their days struggling to pay bills and find housing — are fully on board. 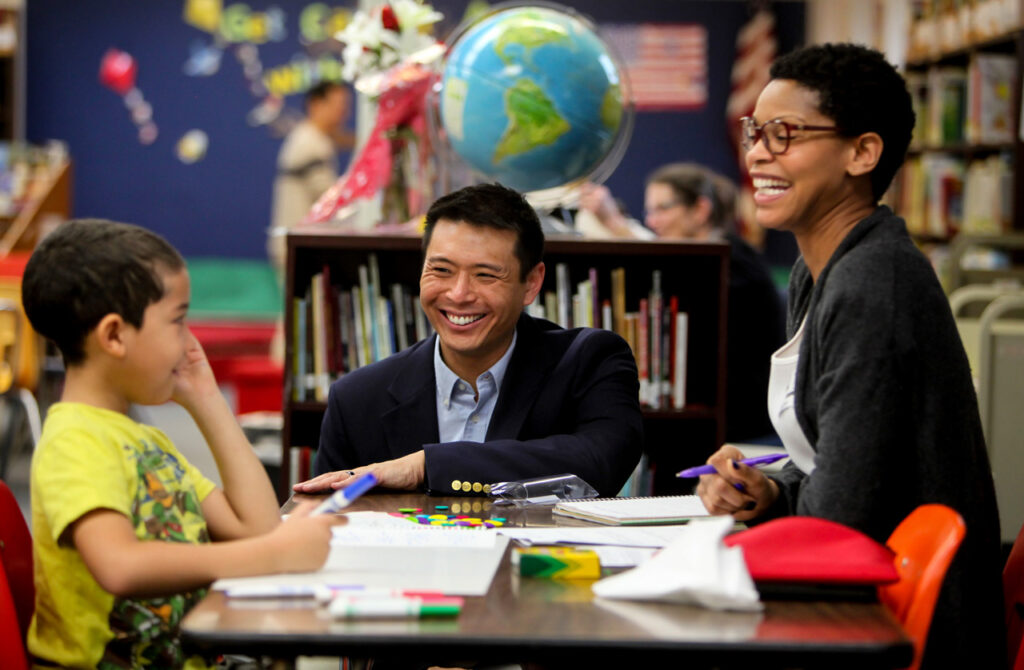 In 2015, a year after McNally came there, the school received a reward. SchoolDigger, an online ranking site, gave Highland its first-ever star.

“We wanted a big banner that said ‘We’re a One-Star School!’” McNally said, only half joking. “To go from being the lowest . . . it’s exciting to me after being where we have been.”

While the school’s Ohio Proficiency scores are still low, a few performance measures show reason for hope. Nearly 94 percent of third-graders passed the state’s Third Grade Reading Guarantee in 2016. Nearly 60 percent of fourth-graders passed the proficiency social studies test, the 18th best results in the district. And by spring, students seemed on track for better reading and mathematics results in 2017.

Never far from McNally’s reach are spreadsheets assessing the progress of Highland students. Names highlighted in red, yellow and green show how students fare in the Northwest Evaluation Association’s Measures of Academic Progress. By midyear about 25 percent of Highland’s third-graders were green — on track — nearly double the number of kids in last year’s class.

“We’re going to see if we can translate that into some significant AIR (Annual Institute of Research assessment) growth,” she said.

But, she cautioned, closing achievement gaps can never be solely about the statistics.

“We look at every student by name, not by a group of numbers, not by averages. What are we doing to help each student become successful? What specific supports are we putting into place in addition to the amazing instruction that’s happening?

“And with that, we find we are narrowing those gaps,” she said. “It’s really very exciting.”

Because there are no panaceas when it comes to ensuring success for our nation’s children, it will take a multifaceted, multilayered approach. But step by careful step, we’ll get there, McNally said.

Give to Foster Initiative for Community Literacy Fund #315028