Deanna Wilkinson knows firsthand what it’s like to grow up hungry.

Raised in rural Illinois by her father, who struggled with mental health challenges, she often found little food in her kitchen cupboards. From the time she was nine throughout her transition to college, Wilkinson’s family drew on government assistance to support her. Some days she went hungry.

“I know the signs,” said Wilkinson, associate professor of human development and family science. “Usually it starts with a kid asking, ‘What are we having to eat?’ and then immediately following with, ‘What time will we eat?’ and ‘Are you sure it’ll be at five?’”

Each Wednesday, adults and children alike wander into Wilkinson’s Urban Gardening Entrepreneurs Motivating Sustainability (GEMS) meetings to learn about and enjoy healthy food. Although feeding children is not the main purpose of Urban GEMS, it’s a bonus that allows Wilkinson to provide for those who may be food insecure.

Launched in 2015, Urban GEMS connects nearly 100 at-risk children and their families to science, nutrition, art and entrepreneurship. Each week, students, church members, residents and fellow green thumbs from the nonprofit Reaching Higher Heights Community Care Center 4-Life join Wilkinson as she leads sustainable gardening projects on Columbus’ South Side. One week students might taste vegetables they’ve never heard of — such as eggplant — and the next Wilkinson’s team will dedicate the hour-long lesson to exploring the square-foot gardening method. Lesson topics change each week, but her message never deviates: Healthy and sustainable food management will enrich your life, no matter where you live.

Hers is one of several EHE programs and research projects that aim to understand the roots and consequences of food insecurity and to empower people to feed themselves and their loved ones.

After planting, the sixth-grader and her friends began harvesting. Their small fingers moved nimbly along the six-foot aeroponic vertical gardens at Family Missionary Baptist Church, which houses the Reaching Higher Heights group. With a design reminiscent of a sci-fi action film, the soilless towers are made from food-grade plastic and use a 20-gallon water reservoir system to pump nutrients to plants.

Taylor and her friends moved around the towers’ planters to collect lush kale, spinach and lettuce leaves. They gathered ingredients that Wilkinson and volunteers used to create a huge communal dinner, a weekly event.

Making dinner is a team effort, and everyone gets to reap delicious rewards. That day, they dined on chicken cacciatore and a fresh green salad sprinkled with Gorgonzola cheese, pecans and dried berries. They followed their meals with green smoothies made with kale, pineapple and apples. 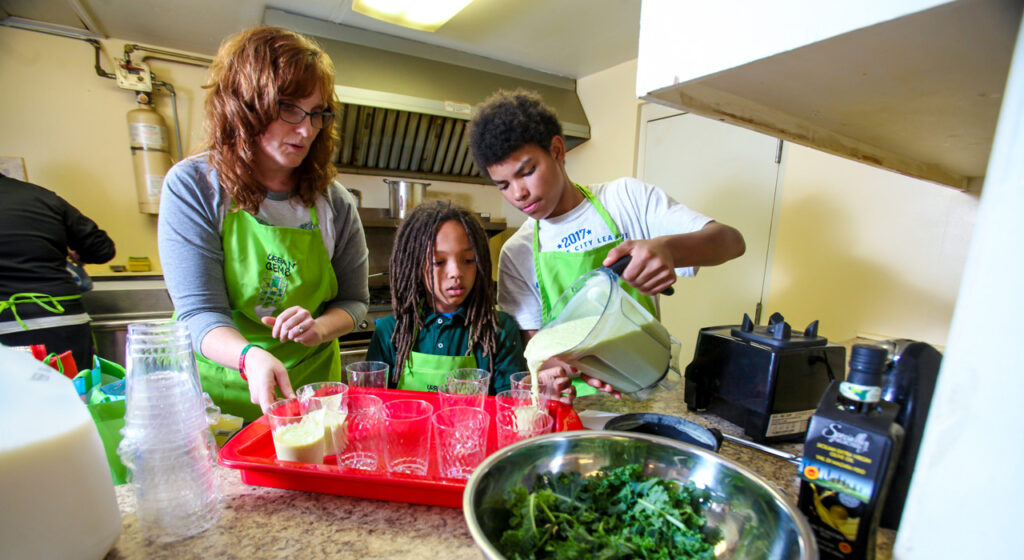 Green smoothies and healthy dinners are the antithesis of foods Wilkinson’s students find in their neighborhoods. Convenience stores are on almost every corner, but healthy food — without sugar or salt as the first ingredients — is nearly impossible to find. In these “food deserts,” youngsters encounter shelves packed with potato chips, candy and sugary drinks. When a healthy snack is unearthed at a local store, it’s usually more expensive than the unhealthy option next to it.

Without a car, grocery stores can be hard to reach, and transporting multiple bags of food is difficult. Then there’s the issue of food costs. According to Feeding America, nearly 18 percent of Franklin County residents, roughly 214,500 people, were food insecure in 2014 — eating low-quality foods with little variety or having disrupted eating patterns due to lack of food. They simply have no reliable access to affordable, nutritious food.

Nationally, the U.S. Department of Agriculture reported that 12.7 percent of U.S. households, about 15.8 million, were food insecure in 2015. These are home to adults, teens and children whose eating patterns are regularly disrupted throughout the year, which has a lasting impact on mental, emotional and physical health.

Funded by the National Institute of Food and Agriculture, with an added Aetna Foundation grant to support youth workforce development, Urban GEMS addresses the educational and nutritional needs of people in economically challenged environments. Wilkinson’s first goal is growing healthy, fresh foods while giving youngsters the skills they need to transform the health of their communities.

Not solely an urban problem

Food insecurity does not discriminate. It touches lives in urban, rural and suburban neighborhoods throughout our nation and around the globe.

Originally from Ghana, Irene Hatsu, assistant professor of human nutrition and food security specialist for OSU Extension Family and Consumer Sciences, began as a pediatric nutritionist studying the effects of poor nutrition on African children living with HIV. A funding change led Hatsu to study how nutrition impacts the health of adults living with HIV in the United States.

She learned that affordability and access to healthy food are key to disease management. While conducting nutrition education sessions, Hatsu encountered a man who admitted he “couldn’t afford to eat healthfully even though he would have liked to,” she said. “As soon as he shared his story, everyone in the room started agreeing with him.” This led her to investigate the challenges of food access.

Today, Hatsu explores the connection between food security and chronic disease management among vulnerable populations. She was surprised when her work led her to the suburbs.

Although the government provides safety nets — such as the Supplemental Nutrition Assistance Program — some in the middle-class may not qualify and fall through the cracks.

“They may have enough to pay for other needs, including housing and health care, but very little left for food,” said Hatsu. Because of the stigma, many food insecure families in the suburbs may not ask for help. “They want to take care of their affairs without other people knowing or judging them,” she said. 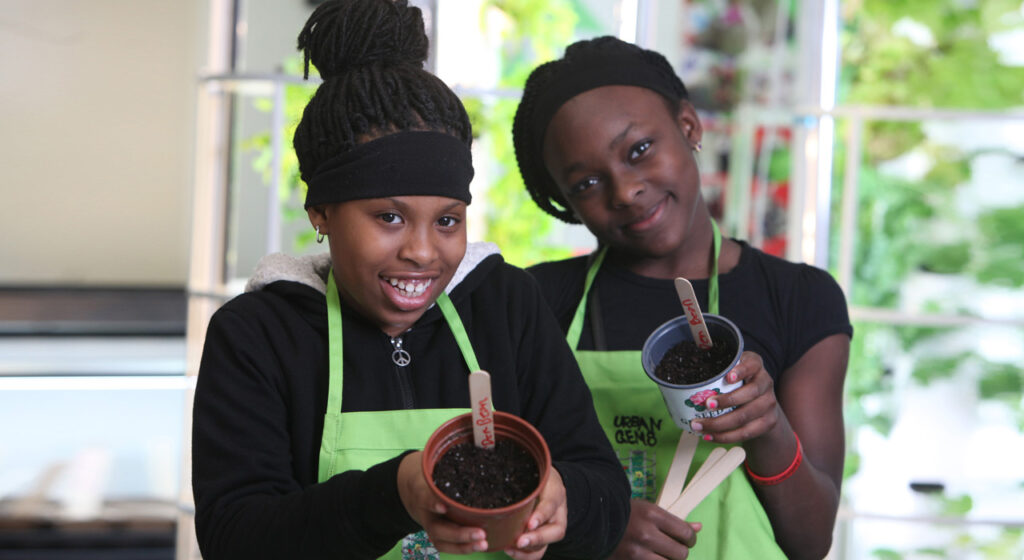 Her latest research effort includes collaborating with OSU Extension, the Kirwan Institute for the Study of Race and Ethnicity and the Knowlton School of Architecture to identify barriers to obtaining healthy food, as well as to examine food insecurity in suburban, urban and rural communities.

With funding from an Ohio State Discovery Themes grant under the Food and Agricultural Transformation focus area, the team uses a participatory approach to engage Ohio communities in discussions about their experiences surrounding hunger.

“The communities then share this information with key stakeholders and legislators to help them learn more about the challenges that their residents are facing in regard to food insecurity,” Hatsu said. “We are hoping to put this issue at the forefront.”

Food security on a global scale

A Fulbright U.S. Student Award led Meera Nagarajan (’16) to Athens, Greece, for one purpose: to figure out strategies to get food to hungry children everywhere.

“Greece is facing a very similar trend that we have faced . . . . This is a high-income country in which families can’t afford food anymore,” she said.

Funding from the United States Bureau of Educational and Cultural Affairs has allowed Meera to research the impact of a Greek school food aid system, the Program on Food Aid and Promotion of Healthy Nutrition. She’s learning how the program — which has provided 12.3 million meals to 90,000 children in 530 schools since 2012 — affects food insecurity and health outcomes.

“I am examining the impact of the program on differential dietary patterns among children and adolescents,” she said.

When she’s not working, Nagarajan gives back to a Greek community that has embraced her. She volunteers each week at Khora, a community center for refugees, where she serves meals and teaches English to migrant women.

“Now, more than ever, the fight to eliminate food insecurity is of utmost importance around the world and in the United States,” she said.